Capacitive touch sensors in stainless steel or plastic housing react to contact with hand & are used for switching in various applications. Successful actuation is signalled by visual feedback from LED. LED colour, switching function, sensitivity and many other functions can be configured as desired via IO-Link. Read more here

Where are capacitive touch sensors with touch function used and how do they work?

Areas of application: Where are capacitive touch sensors used?

A touch sensor is an electronic sensor that enables machines to be operated on site. The sensor is operated by users by placing a finger or hand on the illuminated surface. Touch sensors are very flexible and can be used in many applications: in public transport, as enabling buttons for opening and closing gates, as start/stop buttons on machines, etc.

Design and functionality: How does a capacitive touch sensor work?

Capacitive touch sensors are based on the principle of an open plate capacitor. An electric field, which has a constant capacity, is established between the sensor and its environment. If this electric field contains objects with a dielectric constant of ɛr > 1, the capacity increases. A capacitive sensor measures this change and is thus able to detect the presence of objects. Capacitive sensors react most sensitively to materials with a high dielectric constant, e.g. water or metals. They are frequently used for level monitoring of liquid media and bulk materials. Touch sensors are yet another area of application for capacitive touch sensors. They are designed to be operated by touching them with a finger or hand. The capacitive measuring principle is ideal for this purpose, as the human body consists largely of water. Sensors with touch function indicate to the user via LED that the switching process has been triggered successfully.

Configurable touch sensors with IO-Link: Why IO-Link and what are the advantages?

Our capacitive touch sensors are based on the manufacturer-independent and globally used IO-Link standard. This technology has been developed to make conventional sensors – i.e. devices with switching and analogue output – smarter. IO-Link allows you to transmit lots of sensor information at the same time, including several measured values and diagnostic data. Touch sensors benefit, in particular, from IO-Link, as the protocol works bidirectionally. Commands that overwrite certain parameters can be written to the sensor. Our capacitive touch sensors can therefore be freely configured. The altered parameters are permanently stored on the device, even when the power supply is lost. This means the sensors can be pre-configured first and installed later. What happens if the end user is not using IO-Link? When you switch on an IO-Link device, the signal is initially transmitted conventionally without IO-Link - in so-called SIO mode. Transmission via the IO-Link protocol only commences once an IO-Link master has sent a &lsquo;wake up&rsquo; command to the sensor. A touch sensor therefore outputs a conventional switching output if it is not connected to an IO-Link master. This means capacitive touch sensors can be used without hesitation even though there is no IO-Link. With our IO-Link starter kit ADS01 you can get started straight away. You receive all the components and the corresponding software required to configure IO-Link sensors. Alternatively, you can use our parameter setting service. We will be more than happy to configure the devices for you if you so wish. Find a detailed description of the parameters for all IO-Link devices in the download area at the bottom of the item page.

Stainless steel or plastic – when should I use which?

We offer two capacitive touch sensor variants, one made of stainless steel and one made of plastic. The plastic variant is characterised by its very elegant design and the lateral light spots, which make the active face appear much larger. This ensures optimum visibility at a surprisingly low price. They are ideal for use in building automation. The stainless steel sensors are particularly suitable for hygienic and wet zones. The smooth stainless steel surface does not attract germs easily and is very easy to clean. Further, the stainless steel sensor is capable of blocking out water, ensuring safe operation even if the system is cleaned with a damp cloth or high-pressure cleaner. There are sensors with various symbols / words integrated into the active face. The symbols / words describe the function that the sensor actually triggers in the machine. A variant with a neutral active face is also available. When ordering larger quantities, the symbols / words can also be customised upon request. Contact us for more information. 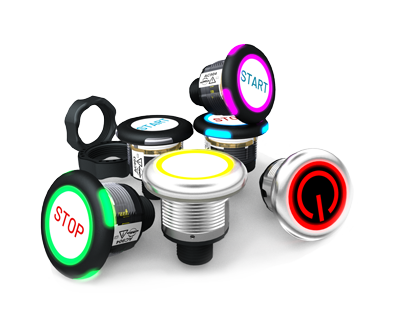 Touch sensors are used as electronic switches that are activated by touch. Optical feedback via the LED in the active face shows whether actuation has been successful. Feedback is usually indicated by a change in colour. Two colours can be determined for the LED. One colour is displayed when the sensor is switched, and the other when it is not switched. There are a few preset colours, alternatively the desired colour can be set as an RGB code. Depending on the actual configuration, the LED lights up permanently or flashes.

There are numerous applications that place various demands on touch sensors. Our touch sensors can be configured to ensure compatibility with almost all machines and systems. It is possible to set the normally open / normally closed function, PNP / NPN and three operating modes. The touch sensor can, therefore, be individually adapted for seamless integration into your application. The three operating modes are: static, bistable (or also toggle) and dynamic.

1. The sensor is switched at the touch of your finger. 2. The output is switched for a fixed period of time. 3. As soon as this period elapses, the sensor switches off. 4. The sensor can now be touched again. Note: The time period can be set freely via IO-Link.

1. The sensor is switched at the touch of your finger. 2. As soon as you remove your finger, the sensor switches off.

Our sensors are very flexible and must therefore meet the demands of many industries. In some of them, protective clothing is often worn for reasons of hygiene or occupational health and safety. Being able to operate our capacitive touch sensors reliably and consistently, even when wearing thin latex gloves or thick work gloves, is essential. Consequently, the sensitivity of the sensor can be increased to allow you touch and activate it through protective clothing. However, the greater the sensitivity, the more susceptible the sensor is to interference. With this in mind, the sensitivity of the sensor should not be set higher than absolutely necessary for the actual application.

We offer two capacitive touch sensor variants: one made of plastic and one made of stainless steel. The device with a stainless steel housing is perfectly suited for hygienic and wet zones. Stainless steel can be easily cleaned and hardly gets dirty. Another feature of the stainless steel variant is that it can also block out water. As described above, capacitive sensors are very sensitive to water. Conventional capacitive touch sensors may be influenced by water and switch unintentionally. This usually happens when the sensor is exposed to rain or wiped with a damp cloth. Our stainless steel touch sensors are precisely configured to detect a finger. By combining a capacitive sensor with a light sensor, they are able to distinguish the difference between contact with a hand or finger and the influence of water. They can even be installed in machines that are cleaned with a high-pressure cleaner without being triggered unintentionally. To guarantee maximum reliability and trouble-free operation, the water blocking and touch sensitivity settings should only be set as high as required for the application.

There are three levels available for blocking out water:

Factory settings: Blocking out water = Basic (only available for the stainless steel variant)

Our smart touch sensors adjust the luminosity of the LED to the ambient brightness. This is possible thanks to the integrated brightness sensor. This ensures optimum visibility at all times for simple and safe operation of your machines. The plastic capacitive touch sensor also has lateral light spots, which not only look elegant but also make the sensor appear even larger.

Touch sensors are often installed in larger systems and machines that run under various operating conditions and through numerous process steps. For example, the operator may specify that a start/stop button should not light up green during system maintenance. This indicates to the user that the machine must not be turned on while maintenance is being carried out. Our touch sensors have two digital inputs, which allow the LED to be controlled by an external signal from the controller. The inputs are not enabled in the factory settings. The inputs can be enabled by an IO-Link configuration of the sensor. Please note that the electrical connection of the sensor changes, since pin 2 and pin 5 are used. Always check whether other sensor cables with more wires are required. If an enabled input is not actively controlled, the LED does not light up in the respective state. E1 denotes the digital input that controls the LED in the inactive state (factory setting = green). E2 denotes the digital input that controls the LED in the activated state (factory setting = red).

E1/E2 are both controlled externally

Our online shop uses cookies to help us improve our offer and provide our customers with the best possible service. By clicking "Accept", you agree to our cookie policy.

Cookies for tools that collect anonymous data about website usage and functionality. We use the insights to improve our products, services and user experience.

Cookies for anonymous information that we collect to recommend useful products and service to you.

Cookies for tools that enable essential services and functions. This option cannot be declined.